Quick thoughts while I continue my scramble to catch up …

Slow Start is becoming quite a nice “cute girls doing cute things” (CGDCT) series. It’s taken care of the early hurdles of introducing characters and the situations they’re all in. Episode 4 bought us Hiroe, possibly the last regular character, another girl unlucky with exams who is behind and is so mortified that she’s in danger of becoming a shut-in, prompting Hana to relate her own story, the first time she’s ever done so. It sounds serious but the show’s light touch and little absurdities keep it light.

Now that the main characters are more or less introduced, the show moves on in episode 5 to getting a little weird. I think I’ve said before that I believe a good CGDCT show should be weird in one way or another, whether through the characters or the production. Again, the episode’s main thrust is to expand on Kamu’s affection for Eiko, which is sweetly done, but it’s how they get there which matters. First, Kamu forgets to wear a skirt, and everyone riffs in their own way about that. There’s some stealth-peeking from that teacher. Later there’s talk of Eiko having a double which leads to a ridiculous conversation about doppelgangers, body doubles, and the like, and the even stranger appearance of the double, who apparently answers to “Eiko.” Oh, I guess we do meet a new character this week, Eiko’s sister Miki, who is not only a little weird herself, but has a running gag with her name going. She fits right in. 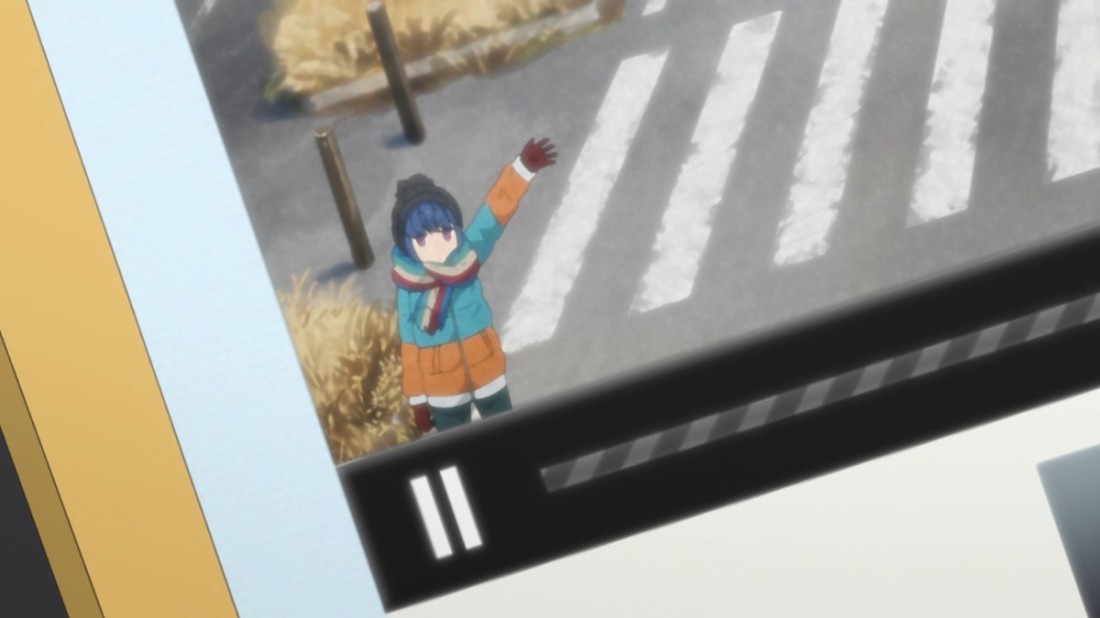 Yuru Camp is a demonstration of how useless categories like CGDCT can be. You could easily argue that Nadeshiko, Rin, and their buddies, are doing things cutely, and the show likes put in little extra cute bits, like that dog in the car, or Rin’s scooter saying “I’m tired!” but the thing they’re doing, camping, isn’t cute, so it fails in the cute things part. It makes me think that when I consider CGDCT shows, I expect them to be somewhat girly, cake shops and the like. On the other hand, the girls are cute and react to things like building fires in a cute way. 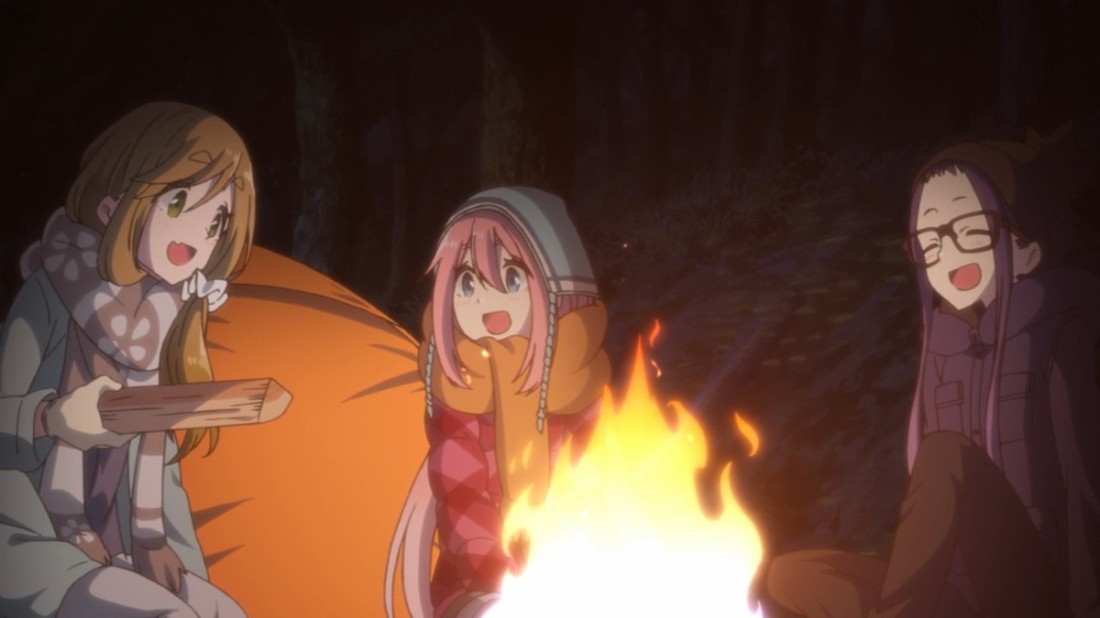 Who said there can be no overlap? We can argue (well, I argue with myself) about Yuru Camp’s CGDCT level, but there’s no denying the level of Stop And Smell The Roses (SASTR) the show has. It passes all the tests: beautiful scenery, quiet peaceful music, and most important, lack of dramatic action and the absence of true threat. In episodes 4 and 5, the club girls go off to Fuefuki Park or thereabouts, while Rin goes to (checks notes) Yatsugatake-Chushin Quasi National Park in Nagano. We watch the club girls prepare for their trip (cutely) while Rin just rides her scooter. It looked like it would be a moral lesson of sorts when the club girls continue to have fun while Rin, the slightly antisocial one, gets too cold and meets some setbacks, but at the end she and Nadeshiko are sending each other night view pictures and everyone has a good time doing non-cute things. 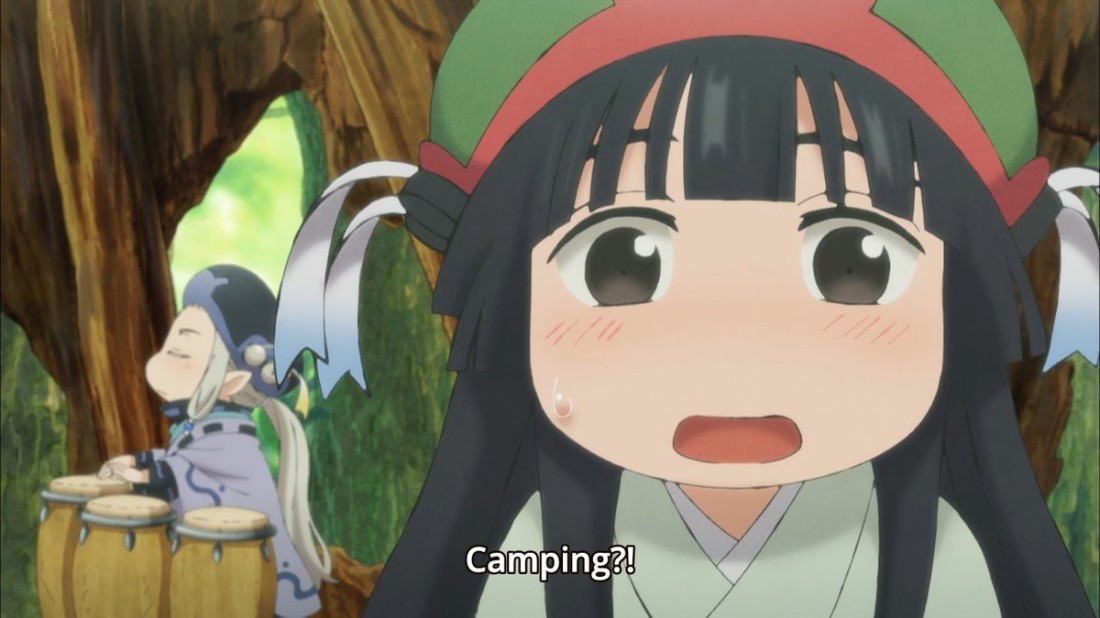 And then, how to we categorize Hakumei to Mikochi? They’re cute little things, but I wouldn’t call them girls–did you get a look at their feet? They’re basically stumps–well, they’re female, but they’re clearly not for the CGDCT team. So, SASTR? Except that episode 3 begins with their home blowing up, and episode 4 has Mikochi badly hurt in a fall. And there are predators about, even if the huge scary owl wasn’t as bad as it first appeared. In addition, the show likes to lull us with peaceful moments and quiet music playing, only to break the mood with a cheap laugh, like that ponkan crashing through their tent. Yet both episodes had as much charm as any show in either category I’ve arbitrarily brought up here. 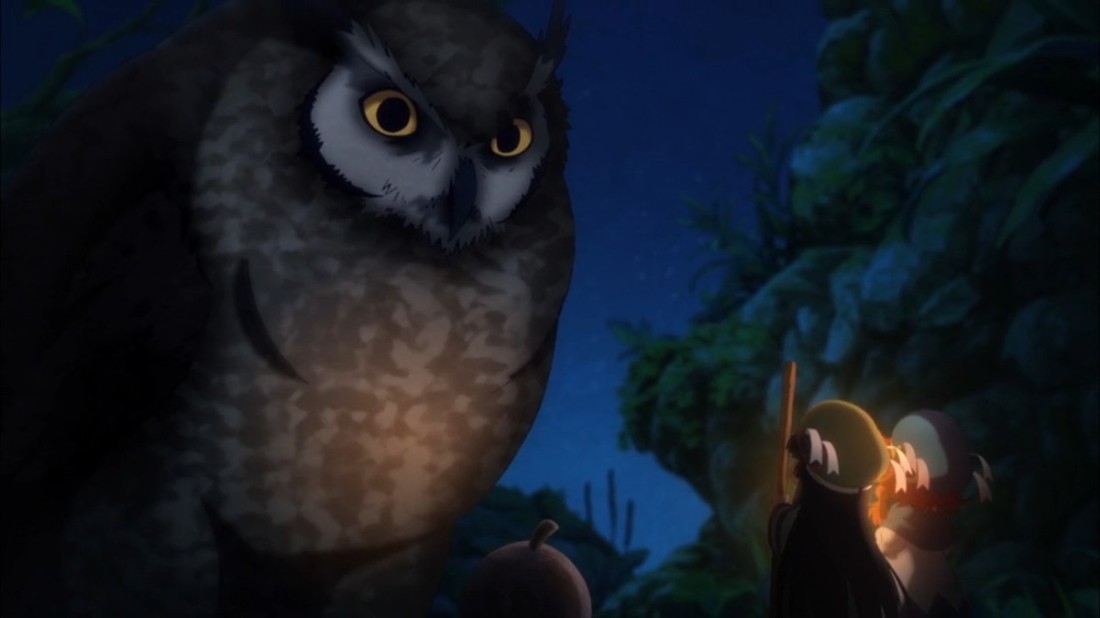 In episode 4 we see Mikochi, closer to nature than any Yuru Camp girl, nonetheless apprehensive about camping. Then we learn what Hakumei does for a living and there’s a brush with death, no, not the house blowing up. They weren’t inside when it happened. Episode 5 explains what MIKOCHI does for a living, and then the scary story with the owl. I pretty much know that nothing seriously bad will happen to either character, but the fall was told well enough that I was seriously worried about her. So what category should we put Hakumei to Mikochi? We could invent a new one, but I don’t know how to describe it nor establish any rules for it. In fact, I probably should not have even brought up SATSR and CGDCT at all. Sorry.