I suppose it’s time to catch up with Hakumei to Mikochi, though I hardly suspect there will be any great story arc unfolding. We almost have a death in episode 7, however, when Koharu the beetle nearly starved. I keep wondering how I’ll react if someone indeed dies in this show. Also, the girls spend a lot of time in tree branches this week, and it gets windy, and they’re only three inches tall or so … But this time it’s all about all the suspicious neighbors who have moved into the girls’ tree and perhaps ruining the quiet neighborhood. But of course it makes perfect sense. Why can’t other creatures live in that tree? It doesn’t belong to anybody. The girls, meanwhile, act like old residents, scratching their heads over all these strange newcomers. And who cut the ladder? The second story, with the rabbit and the pictures, well, I almost forgot to mention it here.

Episode 8 has a story to it, but I couldn’t figure it out. In a lawless section of the city a gang of sorts trashes someone else’s belongings, and Mikochi has to recreate a mint julip recipe in order to calm everyone down. Oh, and Konju is kidnapped but overall seems to enjoy the experience. The fighting is mostly throwing mushrooms at each other, and in the end the gang leader Tsumujimaru seems to have known the recipe all along, I think. We also have Hakumei doing stealth missions on a paper airplane, and the guy whose house got trashed doesn’t get any revenge, though it’s an “anything goes” building. I don’t really get it. I think the show is so used to being leisurely that it didn’t exactly know how to tell an exciting story.

Darling in the FranXX has a ridiculous setup, but episode 8 is even sillier than most of them. A klaxosaur fires goo at them, and suddenly all the girls’ clothing begins to dissolve, putting the boys in various stages of embarrassment and/or lust. The girls are offended, and we have a tape-in-middle-of-the-house situation, which plays out in various, mostly uninteresting ways. Meanwhile the higher-ups comment that puberty has struck all the team at once, and I scratch my head. Until the reality of their mortality (from a visit to a former member’s room before she got killed) forces them to band together, there is only one scene worth watching, where 02 gets in on the fun and has Hiro, in nothing but a towel, chasing her around, and realizing he’s enjoying it. As for the final, more sober scenes, it seems fear of death will strike the libido right out of you (even though the guys all agree that they should apologize and support the girls at the end), but this strikes me as being an unhealthy attitude. Didn’t Hiro get all cured by realizing all he wanted out of life was to be with 02? 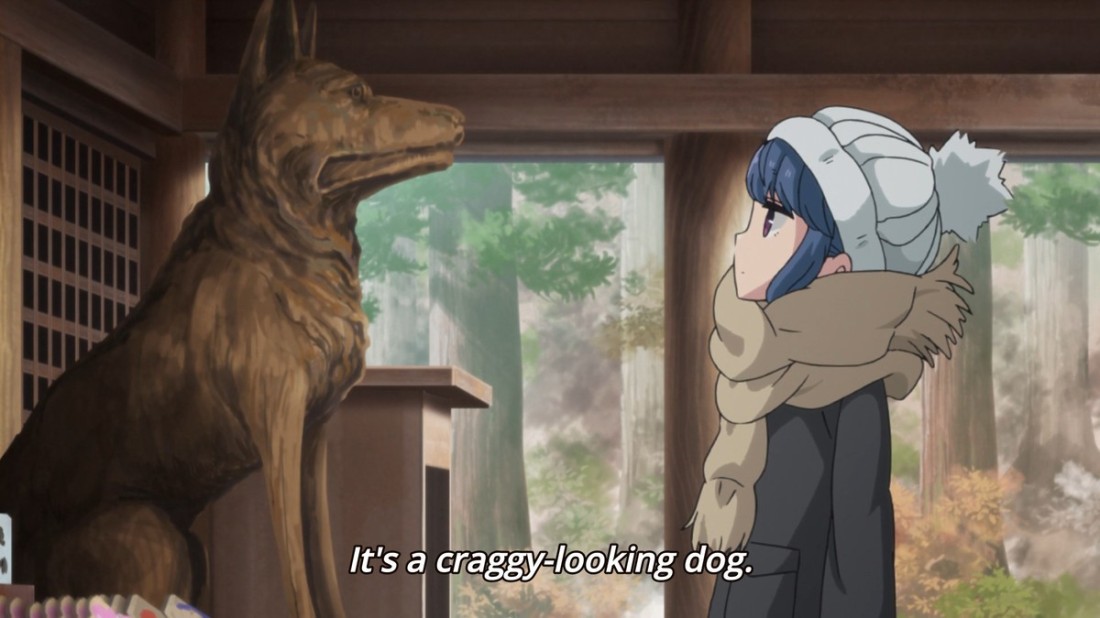 Yuru Camp is at a place where everything the show attempts to do works. Apart from Rin’s dog souvenir battle of temptation (because we knew she would buy the damn thing) episode 9 is a delight from beginning to end, as Rin more or less “wings it” on her latest solo adventure while Nadeshiko in her sickbed and Chiaki text her inane travel advice, though gathering mushrooms seems like a fun thing to do on a camping trip. Rin does visit a dog shrine (wan), meets a couple mountain climbers and gets tea from them, finds her route is closed and has to double back, finds an onsen that’s actually open, waves at some kids, does not meet any bears, and has a dilemma as she oversleeps after lunch. Will she make it to the park in time?!? Oh, and Chiaki makes Houtou. And it’s almost all pleasurable. In fact, I’m rather glad the girls aren’t all camping together yet because it gives us more locals for the girls to have fun in.

Finally, Dagashi Kashi continues its work on getting Hajime fitted into the routine. In the first half it’s Saya, who finds about a dozen ways to seethe about this new hot girl living with her would-be boyfriend, but it never occurs to her to ask him. Which is fine, because Saya doing a slow burn, or a quick one for that matter, or frankly, just showing up makes the episode worthwhile for me. Tou’s scene with Hajime, based on misunderstanding and getting a little lewd, was less successful. Alas, the show still misses Hotaru. None of the other characters has the in-depth knowledge of sweets that she has, apart from Kokonotsu, and he doesn’t do much this episode. Hajime and Saya don’t even know how to eat the roll-candy.