Violet Evergarden 11 has a civil war going on in the north, between some well-organized bad guys who have a thorough and well-planned strategy, and the good guys from “Camp Menace” who are so incompetent, just standing there and not looking for cover during an ambush, that you wonder how they managed to win the war. That was mainly what I was thinking during the early stages of the episode, as Violet goes up there to do a couple letters for a soldier named Aiden, who gets shot just before she arrives, the letters thusly written on his deathbed, or death-floor-of-a-cabin. Interestingly, she has to fight through a few bad guys (and showing us maybe why the good guys won after all) but does not kill them. Then when they stand down she turns her back on them to look at Aiden on the ground–they could have shot her right there, so I guess neither side deserved to win this war.

As for where the show is going now, unless they’re going to bring back the war full-time, I have no idea. The letters and Aiden’s death was done with the same sentimentality that the other episodes have, and it’s getting a little tiresome. However, the episode does depict just how cruel and violent a battle can be. It’s well done, even if the soldiers are mainly bumbling idiots.

While Violet Evergarden keeps us guessing as how they will end things, we have no such doubts about the finale of Yuru Camp. The only question is what little problem they might have with this or that, and it turns out there’s no problems or complications at all, well, except for the camping being too cold for the dog, but they had that covered. But they do throw us the viewer a curveball at the start. Rin returns from getting gas, so we think, only she’s riding a motorcycle now, all the girls are older, and, well, it left me giggling hysterically. Apart from that it was just the night spent all together, and a lovely moment at the end when the sun rises by Fuji-san. And then back to the real world.

There’s really nothing more they can do with this setup, so I don’t expect a season two, but I am sorry to see Yuru Camp go. Every season needs a show where nothing much happens, the trouble is with the wrong setup they can get deadly dull. Yuru Camp was rarely dull. Each of the girls was different and complimentary enough to make interesting and funny scenes, whether it’s Chiaki’s self-mocking leadership tirades or Rin’s quiet but not unfriendly observation. In fact, Rin is an interesting character in that while she likes to camp alone, it’s not because she dislikes or is afraid of others. Other shows would treat her as an antisocial beast who needs to be dragged into the social world. Here they make it clear that there are plenty of good reasons to go it alone, if that’s what you want to do, but it’s nice to do things with others too, a little fact that Rin comes to accept. Couple that with the edcuation we get about camping, and all the pretty scenery … yeah, well, I’m sorry to see it go. 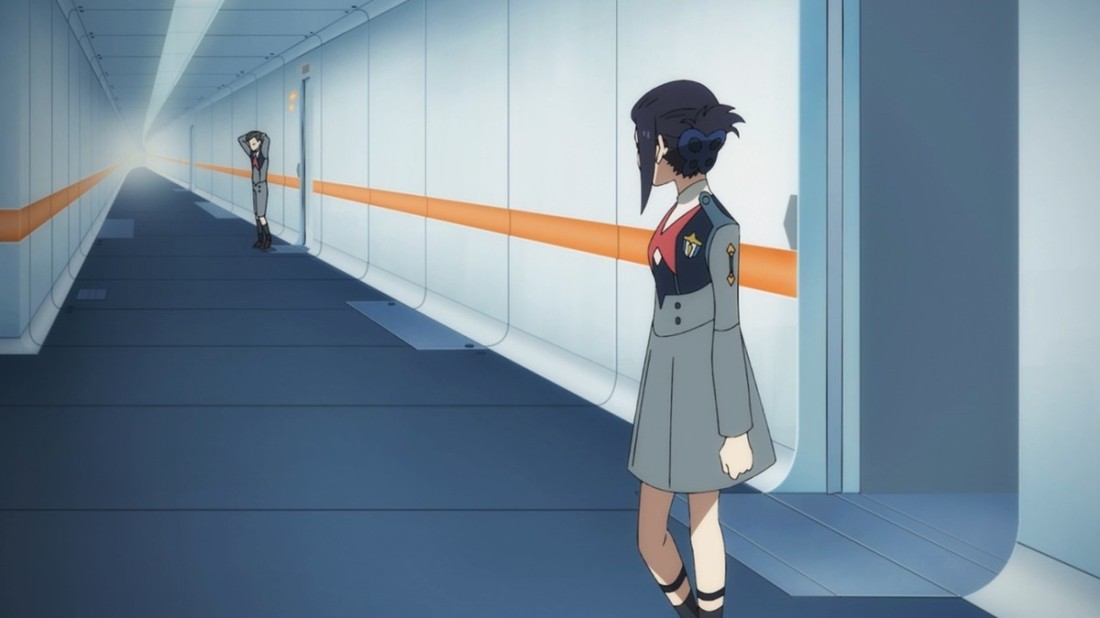 Darling in the FranXX 11 has the kids doing a voluntary partner shuffle, just so we can mess with the kids even more. Mitsuru and Ikuno have had enough of each other, so perhaps out of spite, Ikuno asks to test-partner with Ichigo, which brings up a perhaps inevitable variation of the pistil/stamen relationships the kids have been forced into. On the male side, we find Mitsuru was burned long ago when Hiro forgot a promise to pilot with him. Anyway, Ichigo tries but can’t get it going, so Ikuno moves on to Futoshi, who has his heart broken when Kokoro, whom he loves, asks to switch to Mitsuru. Since he’s a one-note character (food), we don’t see him do much but shout in the cockpit as we watch the more interesting combination, Mitsuru and Kokoro, almost mess everything up.

Most of this is understandable. Some of the kids are tired of their partners or want to try something new. The only one that I don’t understand is Kokoro’s request to team with Mitsuru. Was it out of romantic interest, or out of pity? There is some therapy in the cockpit (tiresome since a Gutenberg-class is about to wreck the plantation) … Mitsuru should learn to trust and lean on people sometimes, that sort of thing. Then there was the rage thing, like Kokoro was about to go rogue, never mind that we haven’t seen that before, what brought on the anger in the first place? Possibly she was angry at herself for hurting Futoshi. But it’s clear that there’s more going on in her head than she lets on. As for the more stable couples, they do just fine … apart from 02’s line about being together with Hiro … until they die. She has more in hear head than she lets on too, and probably with good reason.