3D Kanojo Real Girl stars Tsutsui, your average high school loser otaku, mocked by all but his good friend Ito, who wears animal ears all the time, so he’s not any more fortunate. Tsutsui is made to clean the pool one day with the class slut Iroha, who must also look down at him, right? This being a love story, she doesn’t, but instead humors his antisocial ramblings about how antisocial the world considers him to be. Later she discovers Tsutsui and Ito being abused by some unpleasant girls and stands up for him, and after that he rescues her from some asshole by getting beat up. After that, after more bitterness from Tsutsui and patience by Iroha, they become a couple, though she’s transferring in six months. Oh, and she visits the hospital, so there’s some sad stuff coming. 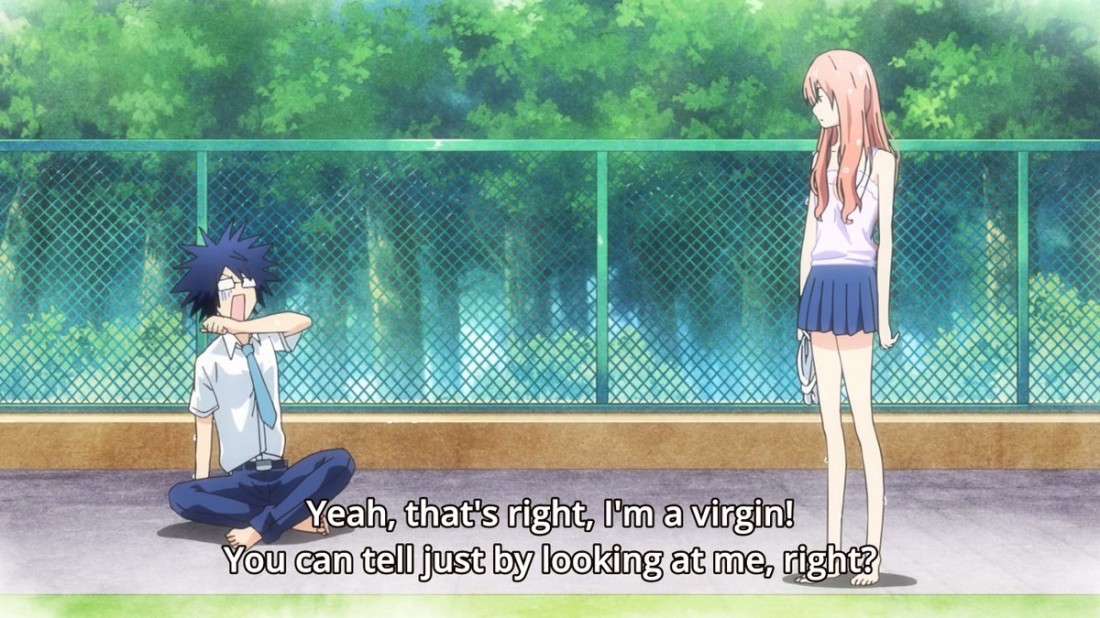 While I’m sympathetic to the put-upon nerd getting a sexy girl story, I’m not crazy about this one. Tsutsui’s bitterness is understandable, but off-putting, maybe because that’s all there is to him, well, that and his perfect academic record. Iroha is somewhat better; her honesty and ability to cut through bullshit is admirable, also the sense that she sees something in Tsutsui that resonates with her. The show around them is often inept. The scene in the WacDonalds with mean girl Mika (who, since she’s given a name, might return later) was not only completely unrealistic, I mean, in real life, do you really think Mika would go out of her way to insult some loser from her past, but also blatant: “We have to give the audience concrete evidence that he gets abuse in order to justify his nasty personality.” Nothing really stands out as new or fresh, at least in episode one, well, apart from that magical girl character. The bits with her were usually fun. 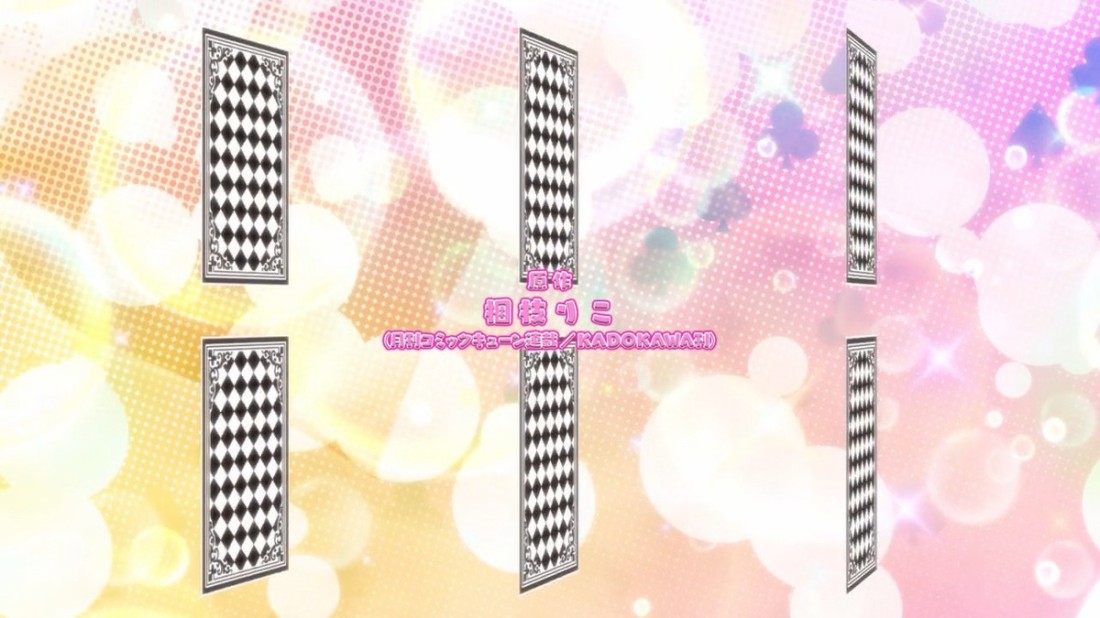 Alice or Alice … perhaps the less said the better. However, I did find it kind of cute, and it’s only three minutes long.

Juushinki Pandora … can’t find at the moment, so I’ll turn to Tada-kun wa Koi wo Shinai, an honest-to-god original series starring Mitsuyoshi, out and about taking photos when an odd little blonde foreigner thing named Teresa keeps crashing his shots, acting strange and being something of a homeless waif. So he takes her to his family’s cafe where we meet some fairly normal people, and an idiot named Mitsuyoshi, until Teresa’s friend Alexandra shows up. Turns out they live next door, and they’re transferring into Mitsuyoshi’s school! 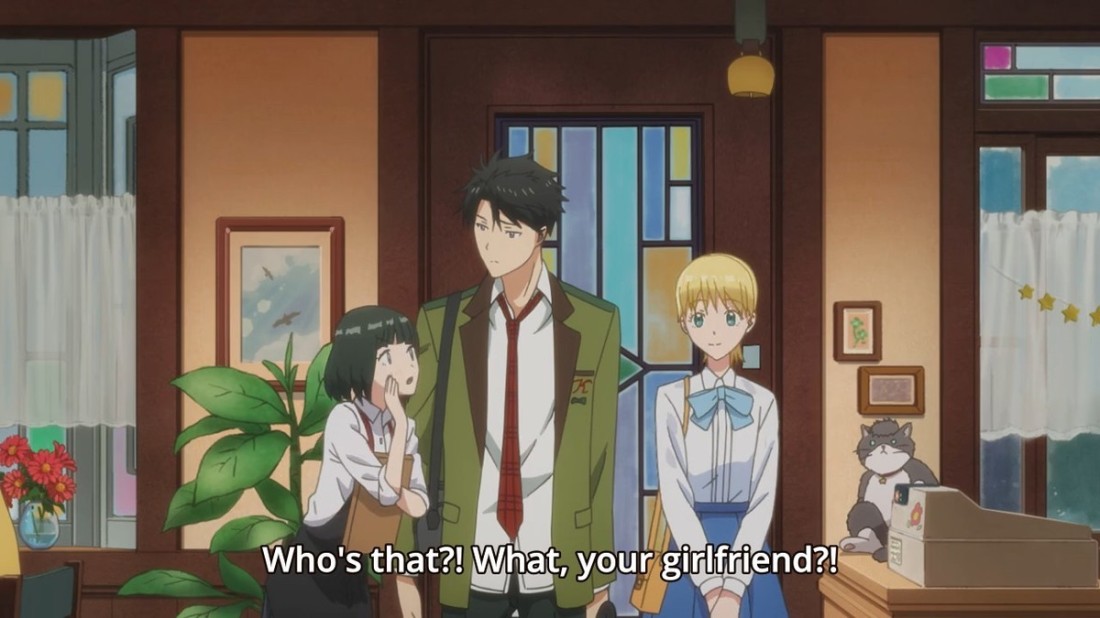 Not bad. Nothing really new in it but it’s put together well. Mitsuyoshi could be a dull character but seiyuu Yuuichi Nakamura is too experienced for that; instead, we have a potentially great straight man. Teresa is too much of a ditz right now, and I’m not crazy about the voice Manaka Yuuichi gives her right now–it sounds too forced. The side characters are all the usual types. I like the dependable, scolding little sister Yui the most. For the moment, there’s nothing seriously wrong with this show, and since it also has a cute cat, I’ll try another episode.

Comic Girls is set in a dorm where women draw manga. We follow Kaos (her cool penname), a struggling newbie who wants new life experiences, as she moves in on her first day, gets nervous about her talent, what the other girls are like, and everything else. She meets her nice, silly roommate Koyume, and then the relatively worldly-wise dorm-mates, the intense, boyish Ruki, and Tsubasa, who draws pervy stuff though she’s quite normal. Together they work together to help Ruki get through a deadline, while Kaos tries to not screw up too much.

There are moments here where the conversations get too ridiculous–like whenever Kaos and Koyume look up to their senpais. In addition, Kaos’s constant anxiety and whining got on my nerves a few times, though her relatively new seiyuu Hikaru Akao otherwise does a fine job. And did the scene where Kaos tries to find the dorm have to be so long? On the good side, a lot of the dialogue is fun and playful, jumping from one manga topic (genres, anxieties, editors, drawing styles …) with the odd gag thrown in, and it moves at a high speed with good comic timing. It’s all a bit silly, of course, but it could be a lot of fun to watch.

Megalo Box, no (sports anime) … Next it’s Saredo Tsumibito wa Ryuu to Odoru. It starts with a quantum physics discovery lecture that essentially tries to explain why are magic, dragons, cute elf girlfriends, basically the whole European fantasy world experience, set in a modern-day city, somewhere. Then we watch two guys, Gayus Levina Soleil and Gigina Jardi Doruk Meleios Ashley-Bufh dispatch two nasty dragons, the second one nasty enough that they get a bit of a reputation but very little pay, because they’re idiots, well, Gigina is. They’re also “offensive Yushiki,” or so we’re told. Then it’s political intrigue time with cardinals, hot emperesses and other weirdos scheduling mysterious meetings. A Yushiki gets killed in the streets by a really nasty woman, Gayus walks around being poor and later making out with his elf-girlfriend, and finally that nasty woman kills another Yushiki. That makes four. Oh, and our heroes are going to be hired by that cardinal I mentioned later. 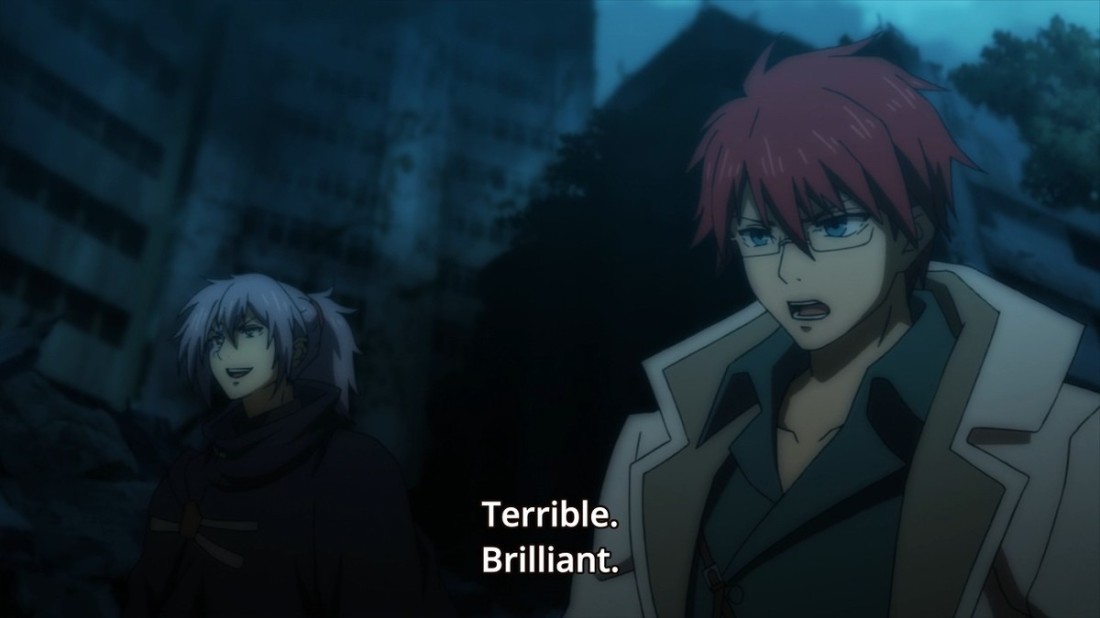 In other words there’s a lot of backstory and world-building to be done here; unfortunately, episode one doesn’t do all that good a job. I don’t mind hopping from one storyline to another, in fact the show did an okay job with that, but the dialogue was so intent on filling us in about everything that it became unrealistic. WHen it wasn’t trying to do that it tried to set up character relationships, also fine, but every character so far is deadly dull. Gigina and Gayus of course don’t always get along, with Gayus being the put-upon guy, yeah yeah yeah. We’ve seen almost all of it before, and so most of the conversations are dull. Finally, the fight scenes are so murky-dark that you can’t make out much of what was going on. I hope that wasn’t deliberate because the animation quality isn’t much … I haven’t watched a supernatural thriller series for a while, but I’ll pass on this one.