After two episodes I’m still not sold on Release the Spyce. The second has the inevitable training of Momo by Yuki, the taciturn one with the scar on her eye. It goes exactly as predicted. Momo can barely keep up with the regimen, the running and chatting up of people, but gets better and manages to pass the final test, a game of tag with Mei, where she suddenly demonstrates great leaping and acrobatic abilities that she couldn’t possibly have picked up in a couple months, and thanks to some prep work, manages to win by maneuvering Mei into a dead-end. Meanwhile, the bad guys drive around (all they do in this episode is drive around) and act evil, and apparently there’s a traitor among the Tsukikage. That’s intriguing I suppose, but I wonder if it’s not a double-agent kind of thing. Anyway, villains aside, I could sort of predict everything that’s going to happen this episode, and it dragged, too. Though the Tsukikage underground headquarters is kind of cool. Don’t feel like watching episode 3 at the moment …

So instead, for some reason, I watched Conception 2, where things did not quite go like I expected. First, it turns out that conceiving Star Children doesn’t involve actual sex … 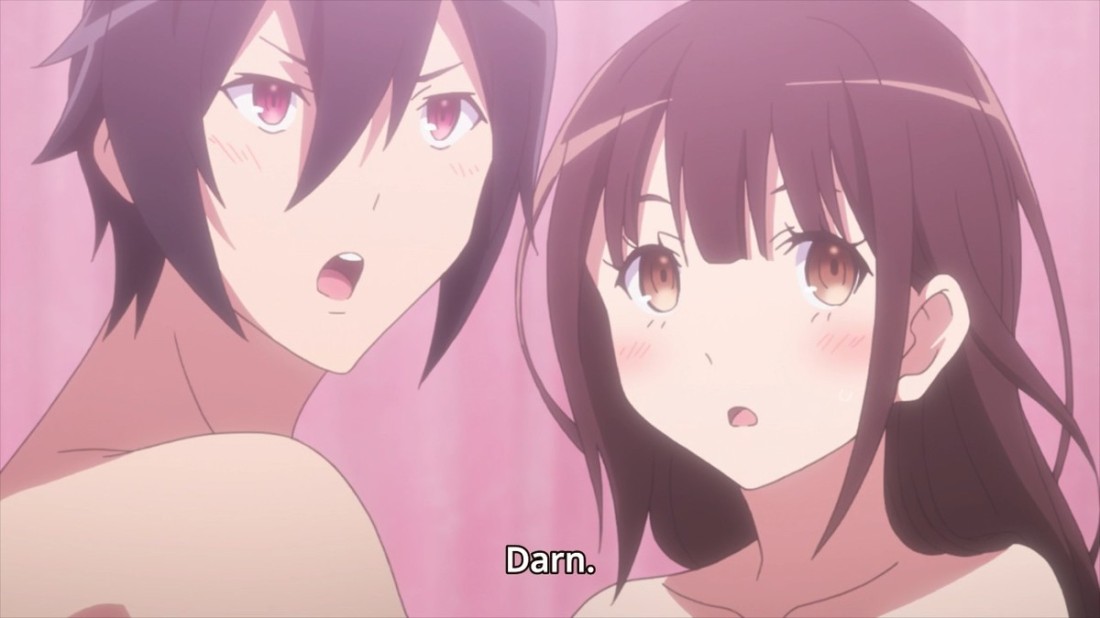 The main girl this week is Ruka (Aries), who isn’t very warlike at all; instead, she’s a stock tsundere. But she’s a tsundere who knows what’s going on, so when he comes on to her she’s fine with it, to save the world, you know. Meanwhile the show plays with the idea of teaching Itsuki techniques to woo women, and promptly forgets about it. So now we have two star children, neither of whom are really capable of fighting anything, as their visit to the labyrinth and Itsuki gets routed and the star children turned into pods … So maybe he’s going to get serious about this and really get the girls excited to produce really strong star children? I figure one girl per episode, so this puts them behind schedule. A more interesting plot point is Mahiru’s forgotten promise and her obvious, drunken jealousy. I wonder if the show will play that up too, or whether she’ll just get shoved aside when it’s convenient for Itsuki, like the show has already done to her.

So on to Akanesasu Shoujo, where the girls get a new frequency, not sure how, and find themselves in the wild west, er, with a few cars, cell phones, and broadcasts of gun-duels, which is the standard way of settling disputes here. And so we have our story. It’s an unjust system where the person who’s the better shot will win any legal dispute. Mia, the key tries to find justice in this world as a deputy sheriff, while Asuka is a bounty hunter and Chloe and Nana are the criminals. No subtlety this time–the girls repeatedly run into each other, and soon our Chloe and Mia are captured and the criminal ones are planning another robbery with our Asuka and Yuu, in order to make money for kids left bereft when their parents die from duels. And we have a good idea who the Clutter is, too, and by dealing with her, they can change this world for the better. So we’ll have Mio fight her, become stronger, and I’m sure the others will find themselves in the dueling arena before the end, for kicks. 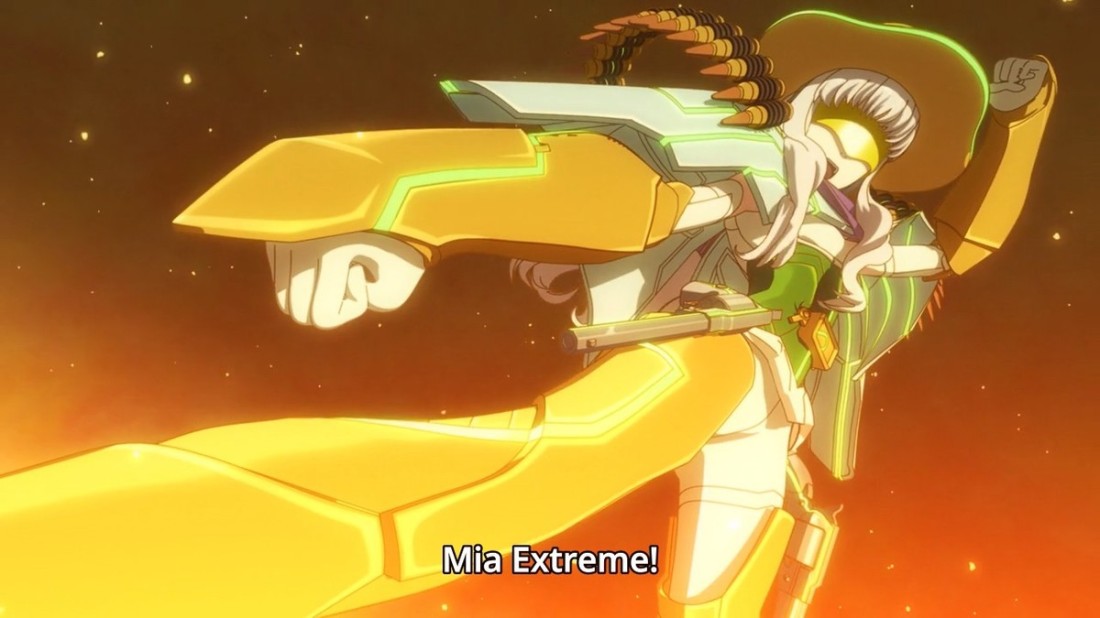 Yep, a duel to conclude the arc, well the start of a duel, then a duel between clutters and two heroes of justice. It would have been quicker if Nana hadn’t had her walkman taken away when she, and everyone else except Mia got arrested. Since they laid out the moral dilemma last week there wasn’t much to do this time except let the plot work itself out. The only surprise was the sheriff being a second clutter. Well, there was also Sexy Yuu putting the moves on Asuka, and Asuka not minding too much. The only real character development came from Mia’s decision to be a hero rather than just stand back and be cute like everyone wants her to do, but that was the point of the arc and we saw that coming a mile away. So that’s Nana and Mia taken care of. Who’s next? They’re probably saving Akusa for last, since she’s the center of the currently-dormant big story arc. They might delay Yuu, too, because of that Sexy Yuu interfering with things. That leaves Chloe, so expect a Chloe arc starting next time.

Yep again, episode 6 is Chloe. It’s also a beach/swimsuit episode. Basically Sexy Yuu takes the girls to a fragment which is all little islands and beautiful beaches, with an AI service that delivers everything they want. The rest of the girls goof off a lot and play with cellphones while Chloe enjoys herself on a separate island. The key of the episode is that she likes to spend time alone, something the other girls reluctantly accept but worry about. So does Chloe, now that she’s living in a more communal place than Paris. Is it really okay to be alone much of the time? Meanwhile, there’s actual plot going on underneath. The girls are slowly being brainwashed by their phones, and maybe by the beautiful surroundings. Chloe, by herself, is the one to discover this. Meanwhile, I’m somewhat intrigued by Sexy Yuu. Earlier in the season she seemed like a threat, and she is of a sort, but she’s also driven by more childish impulses such as hedonism and lust, which makes her less dangerous but more fun. Whether she’s aware of the danger this fragment is threatening the girls with is anyone’s guess. She might have just wanted to ogle Asuka in a swimsuit.

Tensei Shitara Slime Datta Ken 4 brings Rimuru and some other guys to Dwargon, where dwarves and other types hang out. Naturally there is a complication at first as some goons wrongly take Rimuru and Gobta to be weak enough to beat up. That lands them in jail, where it just so happens that there is a need for healing potion, which Rimuru happily supplies. Then a blacksmith desperately needs to make twenty longswords made of magic ore, which Rimuru happily supplies in exchange for help for the goblins. That leads him to a elf-hostess club, and it’s all happy. Nothing seriously bad happens in this show, and Rimuru has a knack of being in the right place at the right time, also those superhuman abilities. Even so, it’s fun to watch. Rimuru is a likable slime who isn’t above some elf-lust.

Episode 5 brings the trouble that episode 4 warned about, but it pretty much turned out all right. Minister Vesta comes to the elf-club, pours a drink on Rimuru, and Kaijin the blacksmith punches him. So it’s a trial, where things get a little complicated. It’s a sham trial (the second once this post!), but Gazel Dwargo, the big boss, asks Kaijin to work for him again, but Kaijin is committed to Rimuru now, so it gets changed to exile, which is what they all wanted anyway. It’s obvious that Gazel has great fondness for Kaijin but can no longer help him, or vice versa–there’s a backstory here that the show will obviously return to it, if the anime is renewed, that is. And Vesta, in a strangely emotional scene, is dismissed from service, another plot point that will be of use … someday. What will happen sooner is Gazel’s mistrust of Rimuru, that “monster, like Veldora.” Probably a running, backstage story arc. Oh, I think they forgot Gobta again. No great loss. 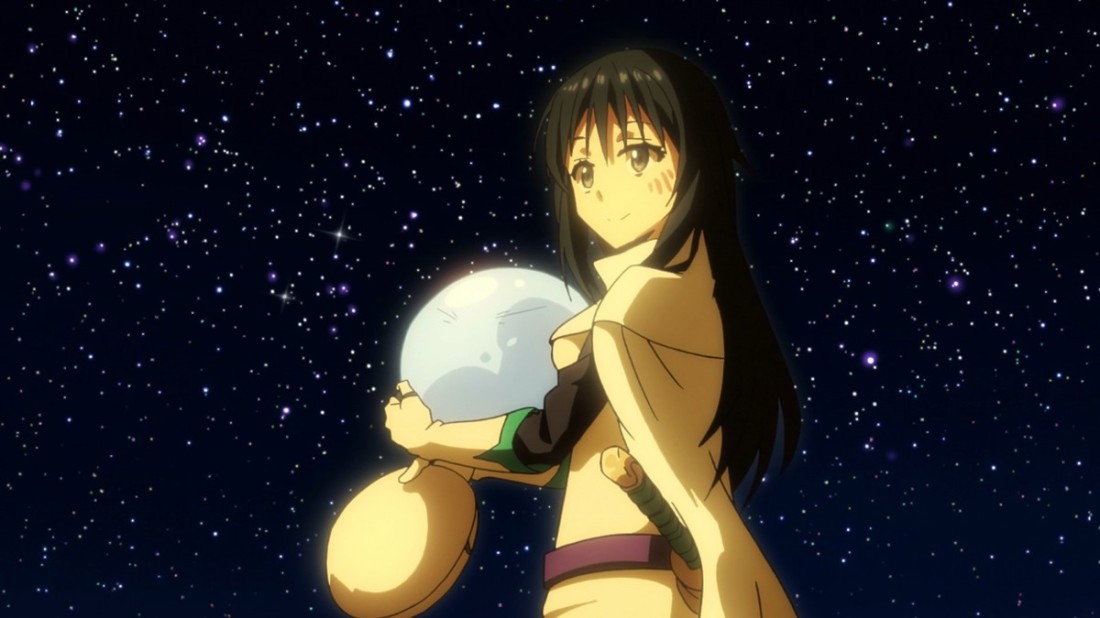 Well, in episode 6 Gobta is shown to have some summoning power, so he might be of some use after all. Otherwise, it’s primarily an episode to introduce Shizu, the masked fire-expert, and the one who Rimuru is destined to be with, though she doesn’t know that yet. Behind her scary mask she’s actually quite sweet, and we spend some time learning her backstory–she was summoned to this world when she was about to get killed during an air raid, though the don’t explain why she gets taken away as a child and appears as a young woman. Next week we’ll learn more, I’m sure. Oh, and the three hapless adventurers show up again, but I can’t figure out if they’re going to participate in the plot or just pop in now and then for an infodump. And slowly, perhaps too slowly, a long story arc is forming.