To begin my second installment we have an odd thing called Pastel Memories, set in Akihabara, and we watch a black cloud sweep over everything and remove the otaku-ness, leaving a boring business district behind. But there’s a little cafe called “Rabbit Shed Shop” where they’re still fond of anime and manga, where Izumi, Irina, and Ayaka work. Someone leaves a message in their notebook asking if they still have the manga with the same name as their shop, and the girls, accompanied by three other workers, Minami, China, and Nao, and then three more, Michi, Yuina, and Kao, run about the district to hunt down the remaining manga shops to buy copies. A lot is made, especially Izumi, about preservation precious memories. They find all but volume 1. Then the show takes a weird turn as in a blaze of light, three MORE girls show up (I didn’t bother with their names), announce there’s a virus, and there’s another one attacking the manga they’re looking for. Three of the girls decide to go to another dimension, the world of Rabbit Shed Shop, to stop the virus. Huh, wasn’t expecting that.

Well, I’m glad the show finally, er, showed its hand at the end, because it was slow-going before that, just looking for those volumes and interacting cutely. It also helped the weirdness have a greater impact. Episode two, with its preview showing the girls shooting monsters in a world that looks like “Is the Order a Rabbit?” (VERY interesting) looks like it will have a completely different feel, though still cute. However, the show dumped a whole lot of girls on us, and none of them seem to have more than a basic stock personality … Well, you can’t flesh out nine girls in 24 minutes, I suppose. Unless the show intends to nod and wink at various manga/anime franchises, I don’t think it will amount to much. I’ll watch another episode.

Watashi ni Tenshi ga Maiorita! features Miyako, a shy girl who spends time at home making cosplay outfits. She has an imouto named Hinata. Hinata brings home a friend named Hana, and Miyako becomes infatuated with her. So cute! Episode one revolves around Miyako trying to spend more time with Hana, while at the same time trying not to freak out the poor girl who just wants to hang out with her friend and not be drooled on by her big sister. 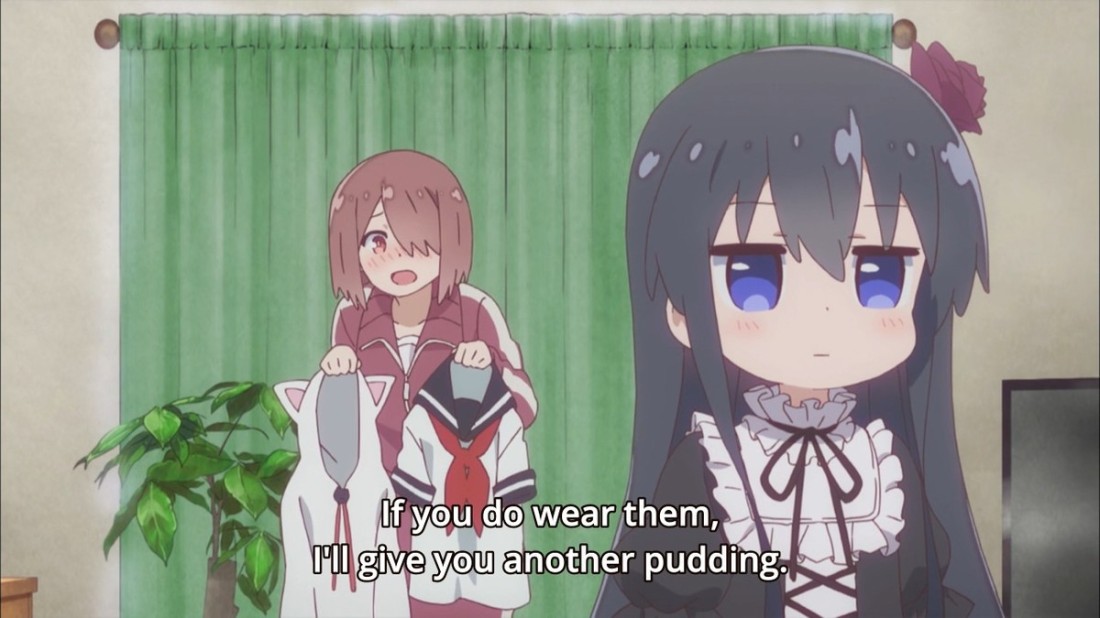 This sounds creepy, and the show acknowledges this–little Hana is a sensible girl who is reasonably suspicious of this strange grownup fawning over her, threatening to call the police at one point. Also, the mothers, at least, are all nearby and attentive, so the show won’t get too creepy. Instead, it emphasizes the cuteness. I liked Hana’s dilemma: her best friend’s big sis is creepy, but she makes excellent sweets, and that is Hana’s weak point. And later on in episode it seems that Hana has begun to see the good points of Miyako as well as the questionable ones. Morals aside, this is another series that might die by not breaking out of the main setup. There’s another girl or two waiting in the wings, so that will complicate the situation, but will it be enough?

Kemurikusa starts with a girl named Rin, with a smaller girl named Rinako … it’s complicated. They’re happy because on the dark island full of ruined machinery they’ve found some fresh water, which a glowing green plant-girl named Midori sucks up and transfers to a vat, but not before a “Nushi,” or bug, or, to us, giant glowing red-black monster, fatally wounds Rinako, who fades away. But it’s all right because there are three other girls just like her, all named Rin-something, all fighting for survival against the red bugs. Then, somehow, a boy appears in the vat of water. A new bug! He’s roughed up a bit and tied up because they can’t kill him, but he gains their trust by helping them detect another Nushi and rescuing one of the Rins from it. 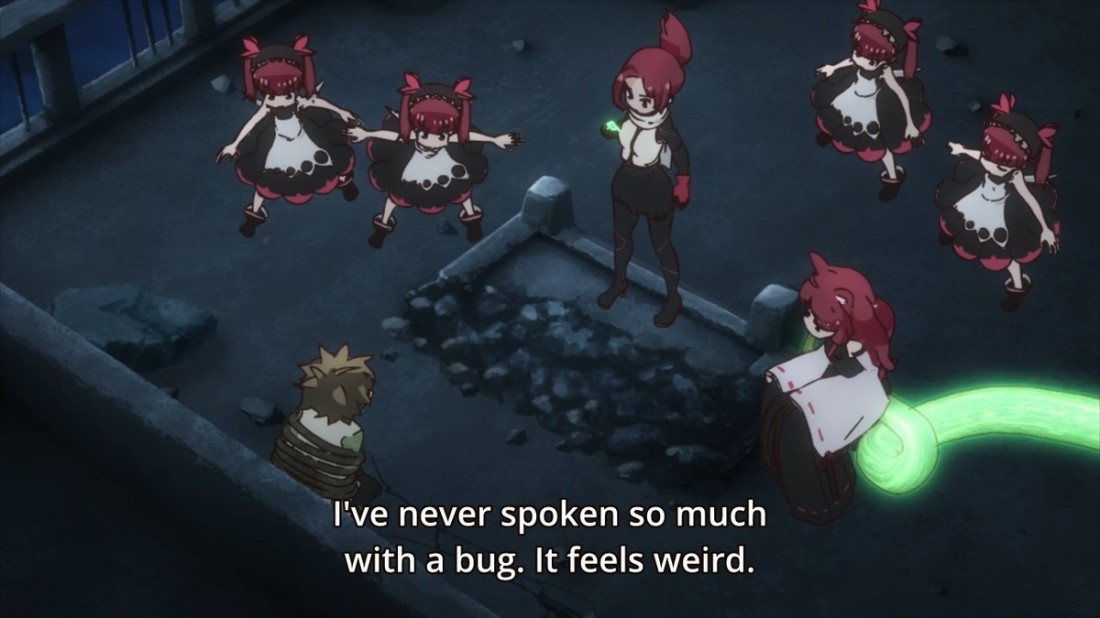 Yes, this is a darker Kemono friends. The character designs and weird movement are the same. The story is completely different though, as this one is full of dark menace, not the sunlight of Kemono. It’s an odd contrast because the characters are as cute and add “nyan” to their sentences a lot, but there’s a lot less smiling, especially from the older Rin, saddled with the main responsibility of keeping them alive. Watching them eat metal is another contrast. So what we have is a possibly interesting science-fantasy series (we’re nowhere near knowing the backstory yet) with Kemono-style characters. It’s worth keeping an eye on, I suppose, if only out of curiosity about how the staff is going to handle this completely different story.

In Circlet Princess we have a girl named Yuuka getting a little lost in a slightly futuristic Tokyo and coming across a venue for a “circlet bout,” which she has never heard of before. She meets one of the ace circlet fighters (Chikage) by accident for an infodump, and then she’s mistaken for the fighter’s next opponent. After stumbling around a bit she proves herself to be a natural, but before the bout is over we switch to a university where Yuuka is a new student, and discovers there’s no circlet bout club there, even though there used to be a good one. But don’t worry, two other girls, fighter Miyuki and her nerdy friend Ayumu are going to make one.

Really nothing to this, and though the story cleverly jumps from one time to another, it isn’t very well thought out. I can’t believe bout staff mistook Yuuka for a seasoned fighter, even with their high technology (the battles are done in virtual spaces, street ads float in the air and point the way, etc). The battle we saw was adequate, not terribly exciting. The characters aren’t terribly interesting. The story is basically “let’s form a club!” coupled with the mystery of why the club was disbanded in the first place. Don’t think I’ll come back to this.

Doukyonin wa Hiza, Tokidoki, Atama no Ue stars a young man named Subaru who hates the company of other people. But since he’s a popular mystery writer he has to face a few people, like his sympathetic editor Kawase, and his annoying only friend Hiroto. While bringing offerings to his parents’ grave (the show starts with the funeral, for no reason I can see) a little kitty leaps out and attacks the tasty salmon slices. Inspired into a new book, he takes the critter home “for research” and soon we have a heartwarming tale of shut-in meets kitty kat, adding meaning to both lives.

If Subaru was more sympathetic I might like this a little more. I felt sorry for Kawase for how Subaru treats him, though Hiroto deserves all the abuse he gets. The man/cat dynamic wasn’t bad, I suppose. I like watching Subaru trying to figure out what this fierce-eyed little thing is thinking. I also liked how the show turns the tables and shows us what the cat is thinking, though we already knew most of it. “The big man is not eating! I’ll bring him food!” I might give the show another chance, to see if new side characters can improve things, but the main story doesn’t interest me much, and I like cats.

Finally there’s Dimension High School, where a pack of boys are doing supplementary classes when a rock that one of the boys picked up starts floating around, calling itself “Spudio the 22nd” and talking about world destruction. The boys wisely throw it out the window but it keeps coming back, finally whisking them to a badly-done 2D world, where a giant sphinx makes them solve puzzles and eats them if they fail. They get it right the second time and get sent back, whereupon they throw the rock out the window again.

It’s a gimmick series, and really an excuse to give us little puzzles to solve. The trouble for us foreigners is that they sometimes expect you to know Japanese, and though the first one didn’t, I didn’t know that until it was too late, though I expect Japanese people might enjoy playing along. The animation looks like a crap VR, which I suspect is how they filmed it. On the good side, the boys have a good rapport and their dialogue in the animation world sounds more spontaneous than your average anime voices. Maybe because they’re live actors, moving around and interacting with lines memorized like they would in stage or TV show. Also, they’re all a little cynical. But I don’t think that’s enough to carry the series for me.