This second installment starts with Joshikousei no Mudazukai, where some girls enter high school and live their pointless lives. There are apparently a lot of girls to watch in this series, but episode 1 focuses on three: Kikuchi, Saginomiya, and the episode’s focus, Tanaka. Tanaka reminds me a lot of Azumanga’s Tomo except she has a single-minded goal, to get a boyfriend. So we follow her around as she asks other characters to introduce her to boys–she didn’t realize she had enrolled in an all girls school until the opening ceremony, we’re talking that level of dumb. Kikuchi handles the straight man duties and Saginomiya sits there saying little but handing out fungi. Oh, and they all get nicknames because Tanaka doesn’t have anything better to do in class, and their teacher likes college girls, he would like to make that clear right from the start. 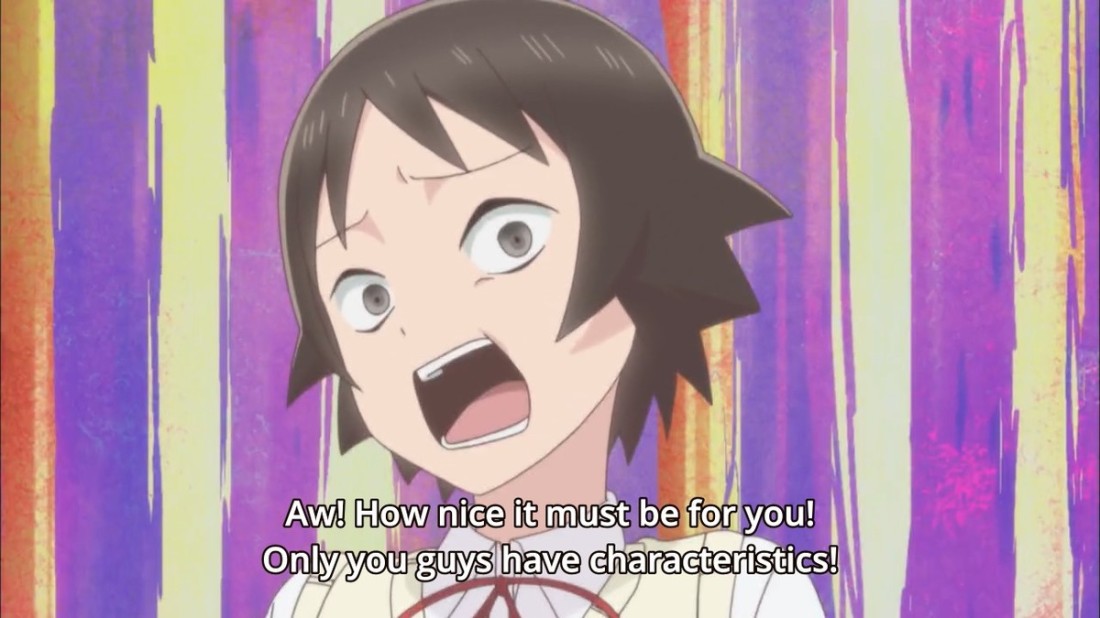 Comparisons to Daily Lives of High School Boys are fair, only these girls aren’t all that goofy, except for Tanaka. And while I’m sure the other characters will get more attention, Tanaka tends to dominate every scene she’s in, and it got tiresome after a while. Baka girls I can handle, but willfully baka ones get on my nerves. As for the others, Kikuchi (nickname: Nerd) handles her straight-man duties well, whether her lines are spoken or just thought out, and Saginomiya (nickname: Robo) is maybe a little TOO quiet. The brief moments with the other girls only give us a quick look at their personal quirk, but again, it’s only ep1. In spite of Tanaka, the show hopped merrily along from one quick scene to the next and most of it was fun to watch. If I have time (and I don’t know if I’ll have time for any shows this summer) I’ll give it a chance.

Dr.Stone is next. It starts with a friendly big oaf named Taiju finally confessing to the lovely Yuzuriha, only a weird green light envelops the planet and turns everyone into statues. Skip to the year 5738, and by keeping conscious thinking about Yusuriha, he breaks free. He finds his sardonic genius buddy Senku already awake in an eden-like Earth, and together, brains and brawn, they set upon survival and coming up with a way to free all the other statue people, those that haven’t fallen apart, that is.

The show sets up some big questions, like how the hell did this happen anyway, and why only humans and birds? Taiji and Senku awaken early, and the show only suggests that they did so by concentrating. Senku counted millions of seconds and Taiju focused on that girl, but surely that can’t be the only reason–even Senku wonders about it. We get some quick lessons on chemistry and brewing, and identifying poisonous mushrooms to boot. This could be an educational show, but with other characters they tease in the ED or OP, I wonder if there isn’t going to be some conflict and fighting. Taiju, after all, acts like a shonen manga hero. I like the two boys’ relationship. Senku comes off as sort of a bad guy, but he clearly likes Taiju even while he insults and teases him. All in all and intriguing first episode.

Enen no Shouboutai takes place in a world where people spontaneously combust and turn into nasty fire-demon things. This happens at a train platform where young Shinra is standing, but before he can help take out the demon the Special Fire Force shows up and takes over, though he does save Oze, a firefighting nun (there’s a lot of theology behind these demons, with the victims being called lost souls) from falling debris. Shinra is actually on his way to the first day of his new job as firefighter, where we learn that he smiles weirdly when nervous, thanks to a childhood tragedy that they refer to a little too often. Anyway, he goes on his first mission with his new team, nearly freaks out but gets a pep talk and finishes the job, thanks to his ability to fire up his feet and move really fast.

So it’s a rookie with a dark past joining a team of eccentrics and learning to bond and work as a teammate. I’m on the fence with this one. First of all, it looks great. They do a great job with the flames and other visual effects. While we haven’t learned too much about the other characters yet, the creators did a good job of introducing them. Shinra’s unnatural nervous grin is the source of both comedy and sorrow, as some people look upon it as sinister, and it’s an effective character trait, a giveaway as to what he’s thinking, whether worried about the battle or getting a glimpse of a colleague’s cleavage. On the other hand, the pacing was clumsy at times, like they are going for a BBB vibe but don’t have the energy to actually get there. And as I said, they draw upon Shinra’s tragic past too often; it got especially annoying during the battle scene where you just want to see the team in action. But that can all be sorted out, this is a promising start to an interesting concept of a series.

In Granbelm we have a girl named Mangetsu admiring a huge full moon before remembering a bento at school she forgot to pick up. When there her world is magically transformed into the ruins of a medieval town where glowing mecha piloted by girls about Mangetsu’s age are battling it out. Soon she’s on the run from one or another of them while a third (Shingetsu) rescues her and gives her (and us) the much-needed but absurd backstory about magic on Earth being sealed away except for these full-moon battles, but where is Mangetsu’s mecha? Of course Mangetsu, rather clueless when things are normal, has no idea. Soon enough, the battle resumes, she runs, then transforms magical girl style, conjures up her own “Armanox,” builds a striking level of rage, and does some uncharacteristic ass-kicking of her own. To be continued says the caption, as if we didn’t know … 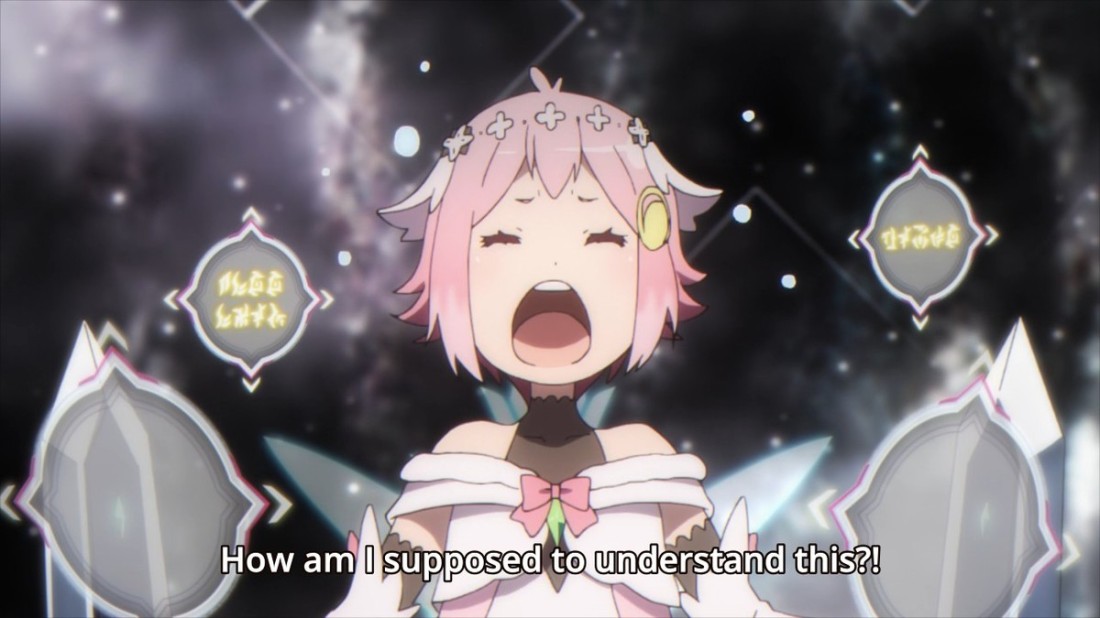 Like a lot of the other shows here there’s a lot they have to explain, like why they’re fighting in the first place, why Anna is so angry all the time, and what happens when they lose a battle. Is it going to go Madoka Magika on us and kill off a lot of people? Or are the battles more sort of symbolic like in Utena? And should we care? I wasn’t terribly thrilled by the first episode. The mecha look interesting but I’m not a mecha guy. The battles are all right but it was hard at first to figure out who was who and what they were doing, and without a reason for any of it, it was hard to keep me interested. Of course, they’ll explain more as the show continues, nothing in this episode really stood out. Except when she was in battle-rage mode, Mangetsu was an uninteresting airhead, and none of the other characters really interested me either.

The show sounds lewd, and though some of the talk is, there is no fanservice or pandering of any kind. These are your average, intelligent highschoolers coming to grips with adolescence. It’s also quite good, honest in how it portrays this difficult time, and you can sympathize with every character. If I can think of an issue it would be that so far all the girls in that school are either virgins or sluts, no in-between. But that’s hardly a reason to stop watching. There is no specific goal in the series apart from their internal struggle; we just glide from one scene or conversation to another, with plenty of food metaphors tossed in. I wonder if that’s going to be an ongoing thing. Which reminds me, it’s about time for dinner here, but I think I’ll stay away from pork miso soup for now …