Itai no wa Iya nano de Bougyoryoku ni Kyokufuri Shitai to Omoimasu stars Kaede, a high school girl who is talked about joining an online game called New World Online. Once in she puts her stats into defense because she doesn’t want to get hurt, so she moves really slowly. Also some of the entry-level monsters are so cute that she doesn’t want to kill them, but does anyway when they get exhausted. Slowly she levels up, meets a few nice people (no assholes play this game, it seems), beats a poison dragon she has no business beating, especially after it dissolves her sword and shield, and attracts the notice of a couple of people who will probably team up with her soon enough. 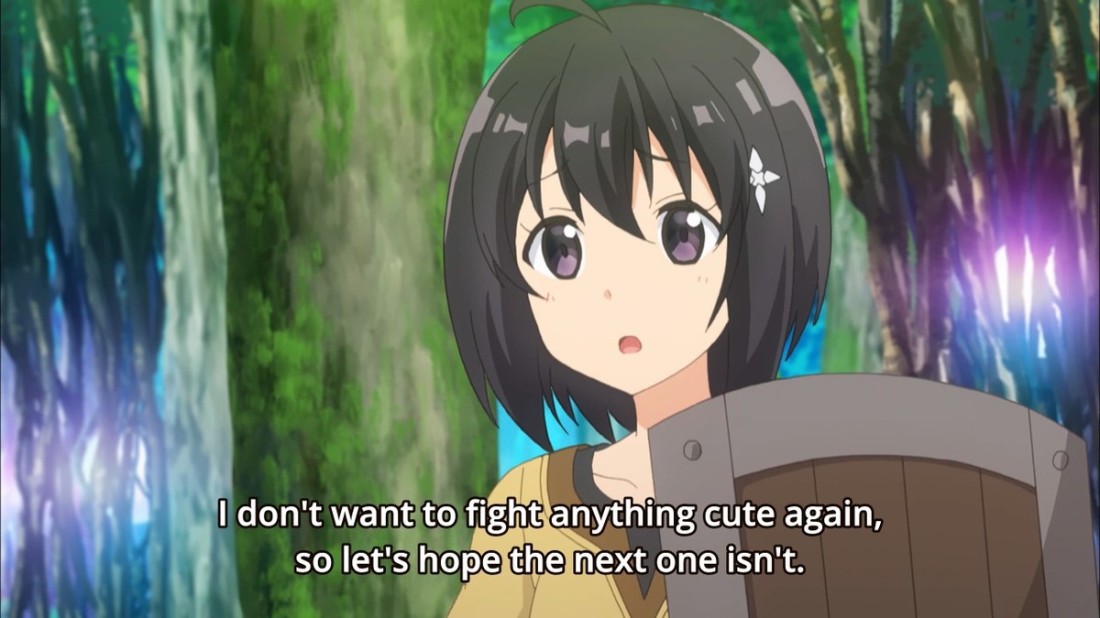 An isekai game, as if there weren’t enough of those around anyway. But I liked it anyway. I liked the niceness of the whole thing. For some reason I didn’t mind Kaede (“Maple” in the game) blundering around making newbie mistakes because she’s so cheerful while she does it, and other players are bemused by her desire to chat them up, so they give her good advice. But she’s not an idiot. When her friend Risa warns her to log out from time to time to study for exams, she does exactly that. It’s all the nice stuff about online games and gamers with none of the “being stuck in an alternate world,” business, not to mention abusive fellow-gamers. Well maybe we’ll meet a few, but overall it’s just happy-happy. I have nothing against happy shows if they’re done well, and episode 1 was done well enough.

Plunderers takes place in a real, though just as silly fantasy world. We start with the child Hina crying as her mother gets sucked into “The Abyss.” She hands Hina a crystal ball witn 10000 on it and is told to find the Legendary Ace, and then she’s sucked away. Flash forward five years, and the adolescent Hina is on a quest to find this ace, visits a village, get molested by a masked pervert named Licht, who is beaten up by the friendly, buxom innkeeper Nana, who provides Hina with an infodump about the numbers everyone has. It hits zero, down the abyss you go! A guy claiming to be the Ace takes Hina away and starts to molest her as well, but she’s saved by the pervert Licht, who is, well, you can guess.

The numbers business is ridiculous, and doubly so when patched on top of a lame fantasy world. Each time you blink they come up with a new rule or vatiation, such as “ballot holders” and “star stakes.” Worse is the fanservice. I don’t mind fanservice at all but I prefer it to be fun and playful and not because of a girl constantly under the threat of being raped. Hina’s number is found on the inside of her thigh, by the way. Overall this show turned me off.

Nekopara is about a guy whose name I didn’t get who runs a cafe called La Soleil, with a staff of literal catgirls. Chocola and Vanilla stay with the guy, while Maple, Azuki, Cinnamon, and Coconut stay with Shigure but come over to staff the cafe. Most of the episode is spent introducing the girls and their situation, who likes whom, which pair get into fights, etc. They also serve customers but it’s never certain whether they’re going to eat the desserts themselves. At the end, Chocola, on an errand, encounters a stray cat kid who follows her home, so I guess that makes seven in total.

Basically, very little happens. We’re supposed to swoon at the girls’ cuteness (and perhaps leer at Coconut, who is, er, better developed than the others and wears sexier clothes) and smile at their adorable antics. The music contributes to this light feel by playing lots of violin-piano waltz time music. In other words, apart from the new cat, I don’t know what they’re going to do to make each episode interesting. I feel like we’ve seen it all, apart from the ecchi side they occasionally tease us with, and I don’t know if I want to see more of that …

Show by Rock!! Hashumaireshi! (oh my god, another catgirl show) features Howan, a girl from the snowy sticks who gets notice that she passed the first round of an audition, and is soon on her way to big, exciting Midi City for the second round. Where she promptly loses the ticket she needs to get in. We switch to three girls rehearsing, the guitarist, Himeko, grumbling to her uncle that she wants to be solo but playing along because “It could be crazy!” whatever that means. Outside, they find the lost ticket and play a song to attract the person who lost it, which is weird logic but it actually works. But I notice they haven’t actually told her they have the ticket yet …

I enjoyed the original Show by Rock!!, and one of the things I liked about it was it’s goofy energy. So I was dismayed by the slowness of the rural scenes that start the show, and even when Howan gets to Midi city it doesn’t liven up much. I’m hoping it’s just “first episode intro blues,” but it makes me worry. The new characters are fine so far. I like the drummer Ruhuyu’s genki idiocy, and Himeko, though frustrated by her efforts to go solo, isn’t a bad sort. Alas, so far there is no narcissistic visual kei guy band in sight. The franchise doesn’t feel right without one. So, a mildly disappointing first episode, but we’ll see how it goes.

Infinite Dendragon has Reiji, your average adolescent boy, slightly in the future, log into a long-awaited VR game of the same name (not Reiji). It’s your typical fantasy game like we’ve seen even in other series this season. On his way to meet his brother a blond named Lilianna runs into him. Turns out she’s looking for her sister. Reiji’s brother says the tyke is probably in this dangerous forest, so off they go, after an infodump or two, in which we learn that “tians,” i.e, NPCs can actually die here, which for some reason doesn’t make them rush off in an instant. Instead, Reiji has say his already-tiresome phrase “Leaves a bad taste!” once or twice. Anyway, after some danger and the birth of Reiji’s “embryo,” who winds up doing much of the work, they manage to rescue the girl, and Lilianna, a VIP NPC in the game, is grateful, as she should be.

This concept of NPCs capable of permadeath has been done at least once before: Log Horizon. I don’t know if Dendragon has the smarts that LH did, or any other ideas at all. As I said, Reiji’s big line (said about five times during the episode) got old after its first utterance. There was also the dithering while his brother (Shu Starling in the game, while Reiji’s is Ray Starling, just for the record). I hate it when characters dither when they should be acting. Brother Shu is amusing in his bear suit. I’m a little curious about how Lilliana is going to repay the debt, but maybe not enough to make me watch another episode.

Falling behind, I decided to skip a couple of shows I am pretty sure I won’t want to watch further. I almost skipped Oshi ga Budoukan Itte Kuretara Shinu. Another idol girl show, pah! Luckily, I watched it.

A young woman nicknamed Eripiyo sees an underground idol group called Cham Jam perform and is instantly smitten by one girl, the salmon-pink Maina. Since then she buys all their CDs multiple times to get the photos and handshake tickets, nosebleeds at a concert so hard they stop the show, and generally makes an ass of herself in every way possible. Maina acts reserved toward her, and given Eripiyo’s over-enthusiasm you can understand why, or is that the real reason? The episode is coy with this angle until the end. We also have two standard-issue otakus as Eripiyo’s buddies, Kumasa and, er, the other guy.

It’s great stuff. It shows glimpses of underground idol life along with the seedier aspects of otaku fans without making either seem disgusting. Yes, Kumasa is an overweight with glasses type otaku, but he also seems like a decent person and fully understands and respects the boundaries between idol and fan, and is treated nicely by his favorite girl because of it. Like Genshiken (which is high praise) the show embraces the otaku life while mocking it. Most important though is that the show is funny. Good dialogue, snappy pacing. Eripiyo is voiced by Fairouz Ai (Hibiki in that dumbbell show) who easily jumps from girly adoration to snarky anger. Her conversations with Kumasa stand out in a show that would be good anyway. This might be the only show so far where I’m looking forward to episode 2. Oh, for the record, my favorite girl is Sorane.