Now to continue with the shows I might watch. It’s a long list so I need to pare it down. However, I doubt that I’ll be cutting Magia Record. 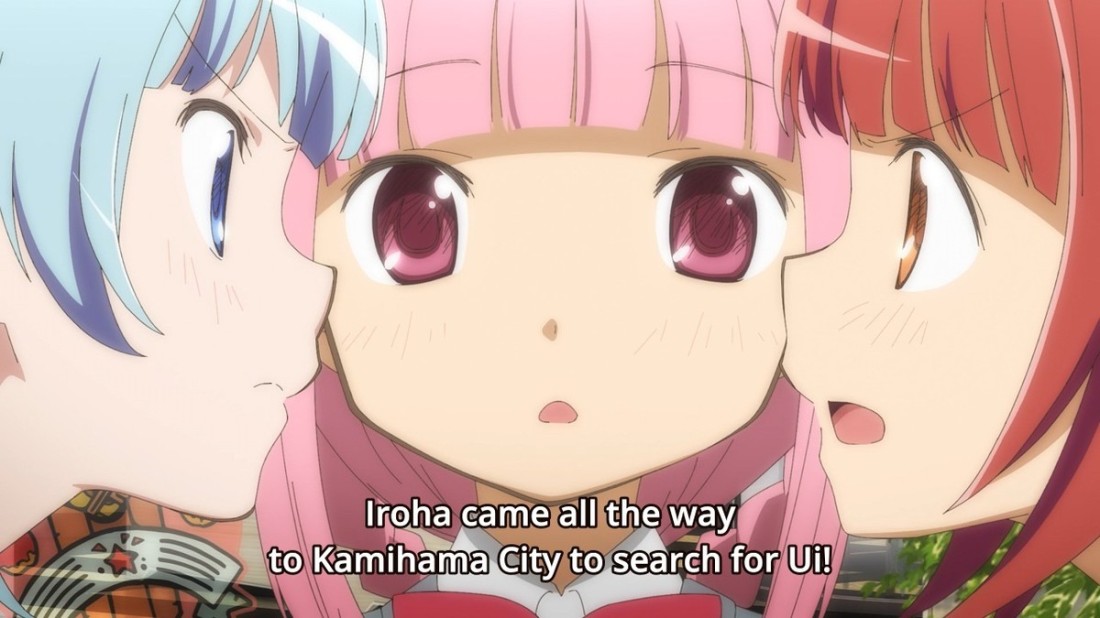 In episode 2 Iroha, her memory returned, though Kyubey suggests it might be false, returns to Kamihama to check out the hospital where she thinks Ui stayed in. Naturally she is accosted by witches and is rescued by a trio of magical girls named Momoko, Rena, and Kaede. They bicker all the time largely thanks to the tsundere Rena, but at least they’re nicer than the girls Iroha met last time. Along the way we learn about a Chain Monster, possibly the Chain Witch, or a high school mystery, who takes estranged friends to try to reconcile into wherever they go. At the end, Kaede and/or Rena are about to be nabbed.

Iroha poses a good question. Is the Chain Monster the same as the Chain Witch that the trio have been trying to locate? While the artistic style certainly suggests a witch, the fact that there are multiple people muttering feels different. Nah, I suppose other witches, like the horn players early in the episode, do the same thing. But why do the magical girls think it’s different? Are there other threats out there besides witches? … In the meantime, we learn a little more about life in Kamihama, the Coordinator, though no one, even Kyubey, knows what to make of the young Kyubey. This all indeed feels like a side story, really a squabble between teammates, and the question of Ui and the “being saved” aspect hardly have anything to do with the episode at all.

We get an idea of what the structure of Eizouken ni wa Te wo Dasu na! will be in episode 2, even though it’s in the early stages. Stuff happens and then there will be an extended fantasy bit. The “stuff” this week a lot of talk about the basics of making an anime, along with getting permission to make an anime, er, film club, since Mizusaki isn’t allowed to join the anime club. So they get a huge sheet-metal shack and begin to search for what they need, which is conveniently in a nearby hut–the former anime production club left all their valuable equipment behind. The big windmill over the canal (that’s a wild school they’re in) sets off the fantasy sequence. The issue of their starting an anime club is dealt with rather easily, thanks to Kanamori. Really, they should let her do all the talking.

I’m rather torn on all this. There is a lot of explaining this episode, and while I welcome the glimpse into the anime production process it does tend to bog the episode down after a time. Also, with their no longer having to keep their club’s activity a secret, what are they going to do besides make an anime? Well, there is a film competition so that would provide a deadline, and Mizusaki’s parents are still against her making anime, but will this be enough to carry the series? Whimsical fantasy sequences, fun as they are, can’t carry the entire series.

In Itai no wa Iya nano de Bougyoryoku ni Kyokufuri Shitai to Omoimasu, which I will shorten to Bofuri, Kaede continues to astonish people. She finds new ways to level up and enters a competition, taking third by waiting around for enemies to show up and standing behind her shield. It’s sort of ridiculous. Happily, her friend Risa passed her exams and can now play, choosing a “swashbuckler” role. Now Risa has a playmate, yay! It’s good for us too because as nice as Kaede is, she’s a little boring. Risa is more confident and genki.

Surprisingly, the show leaves Kaede for a while to focus on Risa and her battle with a big nasty fish. Risa is a more experienced gamer and while the battle wasn’t very well-done, it was enjoyable watching her test her abilities. I doubt they’ll focus on Risa alone very often but it was a nice break from what could have been a dull second half, though I’ll say that the two are having so much fun together that I don’t mind the over-girliness of it.

Oshi ga Budoukan Itte Kuretara Shinu, which I will call Oshibudo from now on, is in a two-story format. The first has to do with ChamJam appearing at a girls festival. Naturally Eripiyo and Kumasa both attend, though since only select girls will appear it’s doubtful that Maina will show. Turns out the event is intended for girls, and our heroes’ otakuness comes as an embarrassment to the other ladies there. But because they couldn’t get another girl, Maina shows up, to Eripiyo’s great joy. The second is more balanced between idol and fan, with the performers arranging for Maina to ask fans for letters, but can’t get the request right. So it’s 100 tachibana slips instead, and it ends in disastrous fashion, thanks to some vermin. You’ll have to watch to understand.

I hope this series doesn’t continue to be a comedy of Eripiyo and Maina continually trying to reach out only to have the gods of comedy thwart their plans. I’d love to see some actual progress in their relationship. They’re hinting at some sort of progress at least with the idols when one of them chats with a girl she has a relationship with, and whom she thinks should be onstage with her. It seems clear that the girl they’d replace is Maina, the least popular of the group … Meanwhile, Kumasa continues to do decent things by getting in Maina’s nonexistent line to tell her that Eripiyo has the flu and that’s why she’s not there. Kumasa might be my favorite character in the show.